US B-52H carry out a patrol throughout all the Mediterranean. It’s the first time since the end of the Cold War that the United States has given such a muscular demonstration to Russia. It is the response to Moscow’s nuclear naval exercises

US B-52H Stratofortress bombers carried out a long-range maritime patrol over the Mediterranean. There is no official confirmation, but it is presumed that they carried subsonic atomic ALCM (Air Launched Cruise Missile) or anti-ship Harpoon missiles. Some analysts also hypothesize the presence of AGM-158C LRASM (Long Range Anti-Ship Missile) missiles. The operation of the aircrafts, arrived as far as Syria thanks to in-flight supplies, is a clear warning to Russia in relation to the crisis with Ukraine. In particular, it could be the response to Moscow’s naval nuclear exercises, which have been going on throughout the week. It is the first time since the end of the Cold War that the US has given a muscular aerial demonstration of this intensity. It is no coincidence that the aircrafts left the transponder on, so that they could be identified and tracked without any difficulty.

The B-52s route on the Mediterranean Sea 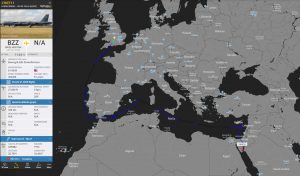