Russia mistakenly uses F-18 Hornets in propaganda posters about the invasion of Ukraine. Someone inserted the unmistakable aircraft in a triumphal maxi poster linked to operation “Z”, appeared in Voronezh. For Putin, beside the damage, there is insult: the fighter is American

The Russia regime’s propaganda on the invasion of Ukraine suffered a glaring mistake. In the past few hours, as reported by the analyst and Marine Rob Lee, in the city of Voronezh a maxi poster has appeared in support of the “Z” operation, showing a Russian pilot and a fighter with the triumphal inscription underneath: “The world has been conquered by the Great and will be preserved by us ”. It is a pity, however, that the aircraft in question does not belong to the Moscow fleet: it is an American F-18 Hornet. This can be understood from some exclusive technical characteristics of that machine, also different from its evolution. The hoax is already making the rounds of the web, causing great laughter, both for the macroscopic error and because a plane of the “bitter enemies” was used as a model: the United States. It is not clear, however, whether the maxi posters were disseminated elsewhere in the Federation. Who knows how Vladimir Putin will take it, who beside the damage has also suffered insult. 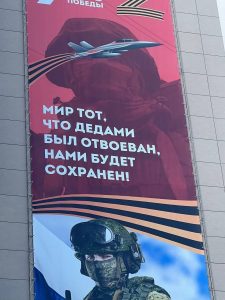