Baykar donates 3 TB2 drones to Kyiv to defend the country from Russia. The decision after the discovery of a crowfunding campaign to buy the UAVs. The Turkish company: Allocate the funds raised to the population

Baykar, the Turkish drone manufacturer, has decided to donate three TB2 models to Ukraine. It did so after learning that a crowfunding campaign was underway to buy UAVs, destined for Kyiv soldiers. In a statement, the company stresses that the donors are from the business leaders to the common people and that the goal is to reach the required amount in a few days. Baykar has specified that it will not accept payments and that, instead, it will send three machines to the European country for free. In return, it only asks that the funds raised be used to help the local population. The company’s stance is an important signal, as Turkey has so far remained neutral, trying to facilitate negotiations between Ukraine and Russia. Moreover, it concerns a key asset such as that of drones, strategic in the ongoing war. 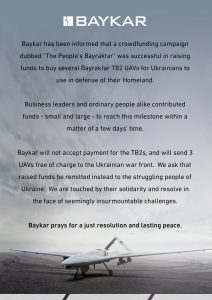