Isis and Al Qaeda are two sides of the same coin, minted at different times but with a common goal: to recreate the Caliphate abolished by Ataturk. This represents not only a concrete danger for global security, but also risks triggering a war of religion with uncertain outcomes

The terrorism of Isis and Al Qaeda and its possible developments. This is the title of a study, now in its seventh part, carried out by the group “Indomitables,” which traces the history of the two formations and the phenomena that led to their rise and fall, as well as the “rebirth of the Phoenix”. A new formation, which builds on the peculiarities of each of the two sides of the same coin: leadership, operational and logistical skills, and technology. This in order to recreate with every means, violent in the first place, the Caliphate abolished by Ataturk. The analysis, divided into chapters, intends to be a useful tool to understand the new terrorist form and to look for suitable instruments to contain and/or mediate the disruptive dynamics of Jihadism, covering various geopolitical areas and historical periods. Such developments represent a concrete danger for global security, in the West and elsewhere, and could unleash – as happened in New Zealand and recently in Sri Lanka – a full-fledged religious war with uncertain outcomes, and potential chain reactions leading to a spiral of violence of uncontrollable magnitude and difficult containment.

The universal Caliphate must be established through Jihad. This has been theorized by Al Qaeda and implemented by Isis in Iraq

According to the jihadist ideology, the universal Caliphate must be re-established through Jihad, starting with the creation of regional emirates, which will then become poles of attraction for the neighboring countries. Such an idea can be traced back to the ideologist of Al Qaeda, Abdullah Azzam. The group itself originated precisely to acquire this objective – between 1988 and 1989 – through the initiative of Osama bin Laden and the Pakistani secret services. Following this strategic plan, ISIS soon created the Caliphate nucleus in Iraq in a relentless progression characterized by:

According to well-informed sources, Daesh’s horrifying videos were made by directors and filmmakers who were very well versed in the mechanisms of communication for the public. They have attended intensive courses of film direction, held in Qatar, in a continuous process of recruitment within the reserves of dissent, discontent and unemployment of the metropolitan areas, especially in the West and in the moderate Arab countries. In most cases, this process has involved subjects with prior criminal records. This process has very often involved subjects with criminal records. It has not only ensnared young extremists, but also female elements through which to procure wives and heirs to the jihadist fighters of the Caliphate, attracting them with videos of reality shows, soap operas and television dramas. In order to draw these external realities into its own sphere of influence, ISIS has established “Islamic areas”, prompting them to become affiliated, eventually to achieve unity establishing the “Caliphate”. This unification should have taken place according to the project reported below, which highlights a clear overlap with the jihadist metastases already developed by Al Qaeda on several occasions in 1989, 1996 and 2001. 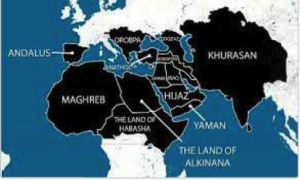 The web and media propaganda of the Islamic State is the natural evolution of the theories of the Global Caliphate, focusing on the third and fourth generation of children of Muslim immigrants to bring terrorist conflict in Europe and the United States

The pronouncements of the so-called “Islamic State”, its propaganda through magazines and the web, as well as its strategy are nothing more than a natural evolution of the theories of the “Global Caliphate” dictated in the ‘80s. Indeed, to such theories were associated the exhortations of Al Zawahiri to bring the terrorist conflict first to Europe and then to the United States. To this end, Al Zawahiri has relied on the third and fourth generations of Muslim immigrant children – especially those unemployed, marginalized and frustrated, as well as on young Westerners in the same conditions – a strategy later skilfully exploited by Daesh. 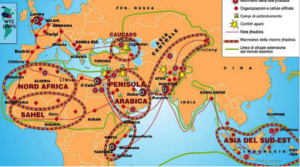 Isis’ occupation of the Syrian-Iraqi area responds to Sunni Islam’s need to counteract the geographical, ideological and religious continuity of the “Shia Crescent”, a territory stretching from Iran to Lebanon

Isis’ occupation of the Syrian-Iraqi area responds to Sunni Islam’s need to counteract the geographical, ideological and religious continuity of the “Shia Crescent”, a territory stretching from Iran to Lebanon. The long-standing conflict between Shiites and Sunnis dates back to 632 AD, the year of Mohammed’s death, as well as the time of the confrontation between Shiat Ali (Ali’s party, namely the Shiites) and the followers of the Sunna (the Sunnis). The Islamic State has expressed this dispute, charged with hatred over time, in the fiercest ways: Abu Musab al Zarqawi, the natural father of the IS, considered the Shiites “poisonous scorpions, much more dangerous than the Americans”. 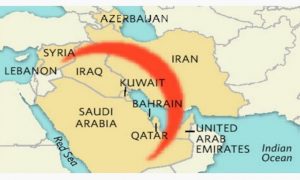 The diffusion of the Sunni ideology entails the reconstitution of the Caliphate, which is inherent in the bipolar geopolitical-religious vision of Islamic radicalism

The global diffusion of the Sunni ideology entails the reconstitution of the Caliphate, which is inherent in the geopolitical-religious bipolar vision of Islamic radicalism, in which the nation-states that divide the Muslim Umma are considered as artificial political entities and therefore rejected. The centers of jihadism dissemination, formed over time in several crisis areas, are merely an attempt to reconstitute the community of believers above the nation-states. This strategic vision proposes not only the ancestral confrontation between Shiites and Sunnis: it goes even further, extending the caliphal sovereignty, first to the Islamic areas conquered from 700 to 900 A.D., and then to those where Muslim minorities, such as the Caucasus and South-Western China, reside. And eventually, to extend the Muslim domination to the whole world, fighting a jihad not between States but between Muslims and infidels, as theorized by General Malik. 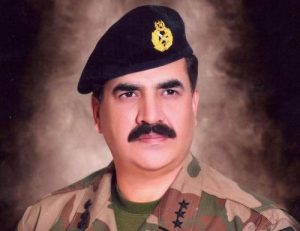 Iran opposes the Sunni expansion policies, strengthening its close alliance with the Iraqi Shiites, those of the Arabian Peninsula and the Persian Gulf, Syria and Russia

These Sunni expansion policies have been opposed and contrasted by Iran, which has constantly been strengthening its close alliance with the Iraqi Shiites, those of the Arabian Peninsula and the Persian Gulf, Syria and Russia. This latter is interested in containing the Jihadist expansionism towards the Caucasus, where considerable and alarming damage has already been caused by the radicalization of Chechnya and the neighboring republic of Dagestan, the objective of the militants who would like to make it an Islamic state independent from Moscow. In the framework described, if the Iranians and Russia support Assad in Syria, then they are the enemies. It is therefore necessary to turn all the attention to them in order to prevent them from creating a territorial contiguity – and not only an ideological-religious one – in the Syrian-Iraq- Iran area. Isis stands right in the middle to counteract this welding. 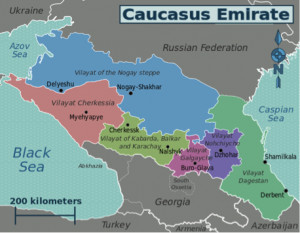 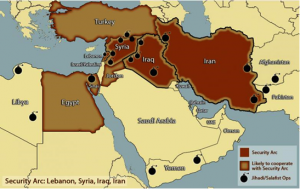 The main ideology of the new form of conflict

The main ideology behind this new form of conflict is not secular but religious. It is more comprehensive, and goes far beyond the territorial or ethnic claim – which we have been accustomed to see – to affect the so-called Ummah (the community of Muslim believers without territorial boundaries, based on the bond of religion and not on the ethnic, linguistic or cultural one) at a global level. It conveys:

The features and the appealing power of the political lever of welfare Islam is comparable to those of international communism. From here, it is only a short step to radicalization and the extreme defense of acquired better living conditions, even if in a regime of brutal dictatorship. 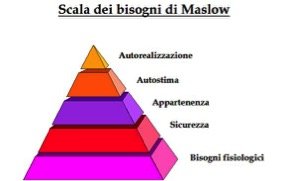 Daesh’s “operational concept” as conveyed by the media calls for the targeting of fragile and ineffectively structured state organizations; in other words, for occupying state areas where the population have no social assistance, thus filling the gaps left by state power. In this context, ISIS has deployed all the info-operational functions of the new form of conflict: “the hybrid war”. It has exploited military deception, offensive and defensive operations on computer networks, counter propaganda and security by means of access control through authentication, the implementation of cryptography, firewall protection, intrusion detection, anti-virus tools, security awareness and training procedures, as well as the latest state of the art technology like commercial drones modified for remote driving and for carrying explosive devices.

The communication of the Islamic State on social media and the press aims to stimulate the attraction towards the Caliphate, radicalizing the would-be jihadists to then enlist them and use them in the hybrid war

Isis communication – whether through the media, the social networks or the press – has conveyed not only religious concepts but also political and social ones. This in an attempt to stimulate the attraction towards the Caliphate, to obtain the radicalization of aspiring jihadists and then to enlist and use them in the hybrid war. These elements of Jihadist propaganda have been absorbed in particular by the young generations of Muslims born in the great Western cities (where their ethnic concentration is high), giving rise to the phenomenon of so-called lone wolves.

Chapter 6 – The clash between Wahhabism and Muslim Brotherhood. Saudi Arabia, Qatar and the moderate alternative to jihad

Chapter 5 – From the birth of Daesh to ISIS. Al-Baghdadi, Syria and the Islamic State

Chapter 4 – From the Islamic Legion to Zarqawi. Bin Laden, Anti-US Terrorism and the birth of AQI

Chapter 3 – From Somalia to Afghanistan. Bin Laden, Mullah Omar, and the Taliban for the Global Jihad

Luciano Piacentini – Commander of Operational Detachment and Company in the 9th Paratroopers Assault Regiment “Col Moschin” (SF-Tier 1) of the Italian Army with the rank of Lieutenant and Captain. Assigned to the Army General Staff, he subsequently commanded the “Col Moschin” Regiment. Later he held the position of Chief of Staff of the Paratroopers Brigade “Folgore”. Then he has worked in National Information and Security Bodies with assignments in different areas of the Asian continent. He is graduated in Strategic Sciences and Political Science.

Claudio Masci – Carabinieri Officer coming from the Military Academy of Modena. After having taken over the command of a territorial unit mainly engaged in the fight against organized crime, he passed through National Information and Security Bodies. He graduated in political science. Among his contributions, “Intelligence between conflicts and mediation” (Caucci Editore, Bari 2010), and “The future of intelligence” (April 15, 2012, Longitude, the monthly magazine of the Italian Ministry of Foreign Affairs).

Claudio Masci and Luciano Piacentini – Authors of the article “The Future of Intelligence” (Longitude, April 15, 2012), and of the books “Intelligence between conflicts and mediation” (Caucci Editore, Bari 2010), and “Humint… this unknown (Function intelligence evergreen)”. Buy it from Amazon here.