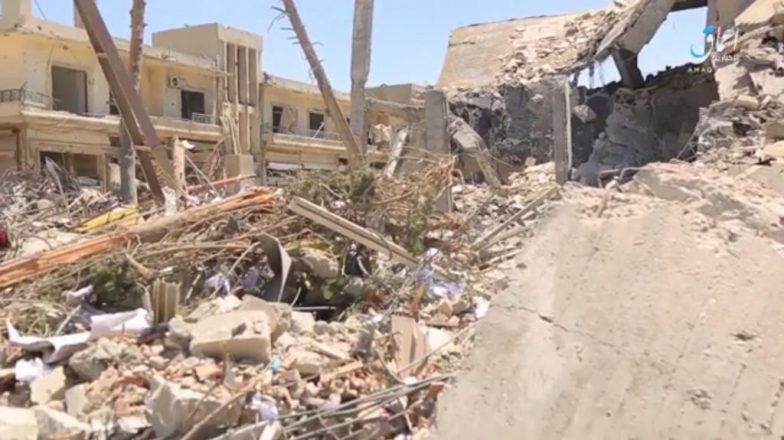 The SDF are tightening the circle around Isis at Hajin, in the attempt to isolate the jihadists from the rest of Deir Ezzor

At Hajin an intense skirmish is going on between the Islamic State and the DDF of Cizire Storm (Al Jazeera). The Syrian fighters, though, are advancing towards the city also thanks to the air raids of the US-led Coalition. The result is that in the last 4 days more than 10 Daesh vehicles, several factories of car bombs (SBVIED) and command centers were dedtroyed. In the past hours another vehicle with Isis militants on board was destroyed in the city of Deir Ezzor. The Kurdish led forces are approaching the residential area from three directions: north, east and south. The objective is to isolate the jihadists, cutting them out from any supply and assistance route. In particular from the southern area of Sha’Fah. However, even this area is constantly being kept under pressure by the air fighters of Inherent Resolve, which are periodically striking there. The last of these attacks has seen the death of numerous terrorists in the vicinity of the oil well of Al Mleh.

Eastern Ghouta: the Syrian army attacks from the axe of Hawsh Dawahirah. The air raids continue and Iranian drones can be seen flying, while the evacuation of civilians decreases

Meanwhile, at western Ghouta the offensive of the Syrian army (SAA) is carrying on at a fast pace. The SAA is attacking the eastern front of the operations’ area, Hawsh Dawahirah. Last night the Tiger Forces conquered the area of Sifco and are now trying to reach the 274th governorate and Shifuniah. In parallel, Damascus aerial bombing is continuing on the enclave, aiming mainly at Irbeen and Duma. In the air together with the fighters also Iranian Ababil-3 drones have been seen. Probably they had taken off from the new military base of Teheran, located approximately at 12 km from the capital. This is managed by the Quds Force and hosts different types of equipment. From aircrafts without a pilot (UAV) to short-range missiles, which according to some sources would be able to hit Israel. There has been a reduction of the number of civilians who have left the quadrant of Wafidin, during the 5 hour daily humanitarian truce. The reason of this, although, is not clear.

Cybercrime, Agent Tesla campaign via email on “RE: ENQUIRIES”
The message rar attachment contains an executable file: the malware itself. Stolen data is exfiltrated with smtp.
Cybersecurity, CISA warns organizations on “potential critical threats”
The US Agency: The cause are the waves of cyber-attacks with destructive malware suffered recently by Ukraine.
Syria, pro-Turkey militias are making cash with archaeological finds
Mass destruction of sites in Aleppo is underway, from Afrin to Al-Jouz. Pro-Ankara groups use bulldozers and jackhammers to find treasures to sell on the black market.
Search
Newsletter