The relocation and expansion plan of the US military presence in the north-east of Syria is realizing. Two new bases open in Qamishlo. One in Tirbê Spiyê and the other in Himo. US soldiers will help the SDF against Isis and will monitor the area

The expansion of the US presence in the north east of Syria, in an anti-ISIS key, is beginning to materialize. In the past few hours, a convoy of military vehicles has entered from Iraq through the al-Walid border crossing. Later it split into two sections: one headed to the district of Tirbê Spiyê and the other in the area of ​​Qamishlo, near the village of Himo. In the two localities according to well-informed sources, new bases will born. Objective: to protect the local population and key infrastructures, such as the oil fields and prisons that host the militants of the Islamic State, from jihadist attacks. At the same time, US soldiers will closely monitor the operations of Turkey and Russia in the quadrant. In addition, the troops will provide assistance to the SDF operations against Isis throughout the area.

Meanwhile, in Kobani, the US military confirms the closeness to the Kurds. They do this by drawing big hearts in the sky as they leave the city-symbol of the struggle against Daesh

Meanwhile, it seems that the last US contingent has left Kobani. The city symbol of the first victory of the Kurds against Isis, in fact, will pass under the control of Russia and Turkey. The military, however, wanted to testify concretely a gesture of closeness to the population before departure. When American fighters flew over the town, they drew big hearts in the skies. This confirms that US forces had no intention of abandoning the SDF and the population, after years of fighting together against the Islamic State. The message came strong and clear in the area. A local leader commented explaining that “a priori from the politics of Washington, the people and the US military care about us”. 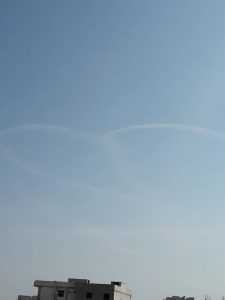