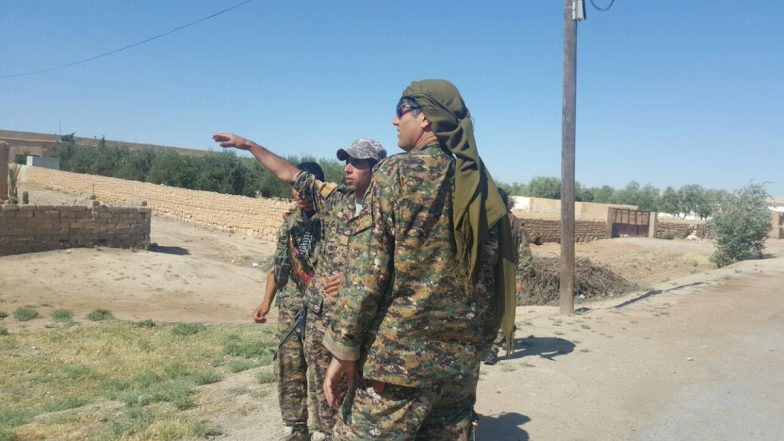 The SDF at Deir Ezzor attack Daesh at the gates of Dashisha, supported by Iraqi air fighters, and in the south are starting to tighten the circle around Harse

The SDF at Deir Ezzor reached the gates of Dashisha, engaging in a violent fight against Daesh. The Arab-Kurdish forces of the Round Up operation (Jazeera Storm) are fighting the Islamic State in the villages of Abu Sakhrah Janubi, Al-Jabour and Al-BoHassoun. In parallel to the ground offensive, the Iraqi air fighters are continuing to bombard the posts of Isis in the city, to loosen the defenses of the jihadists and not allow them to organize their resistance against the Syrian troops in the Middle Euphrates Valley (MERV). Meanwhile, the SDF have started to recruit militiamen also in the southern axis of the maneuvers, at Harse. The objective is above all to take the city on the eastern bank of the Euphrates, in front of Abu Kamal (Al Bukamal). Then, to move towards Sha’fah e Hajin. Here they will probably fight the final battle against IS in Syria, eventually also with the participation of the forces in the MERV. Once they have cleared the area, moreover, the latter will move southwards to help their comrades

Damascus sends reinforcements to the Syrian army (SAA) to contrast the increasing attacks of the Islamic State. Among these there is also the Alawite militia Saraya al-Areen

Meanwhile, Daesh reacts continuing to attack the Syrian army (SAA) at Mayadeen. A few hours ago a group of militiamen of the Islamic State launched a surprise offensive from the Badiya desert against the city, causing damages and losses among the soldiers. As a consequence, Damascus in the past hours had to send reinforcements to the province, in order to prevent the jihadists from breaking the defense lines and creating a safe escape corridor towards west. Among them are also paramilitary Alawite forces of Saraya al-Areen (the Den brigades), known for their distinctive symbol: two crossed scimitars surmounted by the number 313. Thanks to their arrival, as a matter of fact, the SAA managed to take back from the hands of Isis control over the villages in the area and is now fighting the fundamentalists at Hassrat.

Cybercrime, FormBook campaign in Italy on payments
The iso attachment contains an executable, the malware itself. Moreover, it exploits the exe (in English) of an international campaign.
Cybercrime, EMA anti Covid-19 vaccines data manipulated before leaking it
The EU Agency: Some of the correspondence stolen in the cyber attack has been manipulated in a way which could undermine trust in vaccines.
Syria, pro-Iran militias take advantage of the SAA-Isis war in Badia
Groups linked to Tehran will vigilate the Deir Ezzor-Palmira highway, releasing forces against IS. The road is strategic for moving quickly to Damascus.
Search
Newsletter