Isis in Deir Ezzor is succumbing to the SDF even before fighting its last battle. Coalition raids and Jazeera Storm artillery attacks are decimating Islamic State militiamen in Arqoub and MERV

Isis in Deir Ezzor is succumbing to the SDF even before fighting his last battle in the Middle Euphrates River valley (MERV). The militiamen of the Islamic State in the last hours have been decimated thanks to the Operation Round Up (Jazeera Storm) artillery and International Coalition fighters, who are bombing all the Daesh jihadist positions in Arqoub and the surrounding areas. The severity of the loss balance is confirmed by the same messages of the militia on social media. These, in fact, have announced the death of at least two senior commanders, following the raids of Inherent Resolve. The first is Yousif Saleh Al-Ali (aka Abi Humam Al-Hashimi) and the second Bashar Eid Aujami. Both were well known and respected within the IS hierarchy in the Syrian province.

The Isis militias have communicated the death of the two commanders with a message that leaves no room for doubts about their importance. Al-Ali “was one of the most known and trusted personalities in the Islamic State – reads the text -. Aujami was a commander in the Hisbah bureau in the countryside of eastern​​Deir Ezzor, ad was one of the first ‘brothers’ to join Daesh. He showed great dedication and worked day and night to uphold the word of Allah. Both ‘knights’ were killed in one of the continuous ‘Crusaders’ attacks in the Syrian province. “We express our condolences to all the brothers, to the muhajireen and to all the supporters of the Daesh – the message concludes -, for the martyrdom of these men”.

The Daesh message for the death of the two commanders 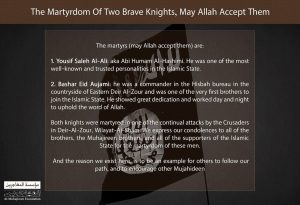 Maritime Shipping, here it comes the Maritime Cyber Baseline
Launched by the IASME Consortium and supported by The Royal Institution of Naval Architects (RINA), the goal is to improve the cybersecurity and align with IMO guidelines.
Cybercrime, Black Friday and Netflix bait for a Dridex campaign
The email xlsb attachment contacts random links from an internal list and downloads the dll, which starts the malware infection.
Syria, internal clashes between pro-Turkey militias in the North intensify
Afrin and Sere Kanye are the epicenter. The military build-up in the area and the few resources increase the nervousness of the factions, even towards their allies.
Search
Newsletter