Here it come the cybercrime phishing scam on Ukraine-UN. A fake ONG asks donations only in cryptocurrency to “continue helping” local people, following the Russian invasion. It’s a trick to make money disappear

UN and the humanitarian crisis in Ukraine are the lures of a cybercrime phishing campaign. 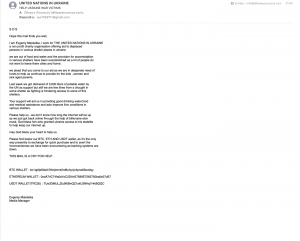 The email, formally set by an ONG which mimic the United Nations, asks for money to continue giving aids for the kids, women and sick aged parents who don’t want to abandon their country following the Russian invasion. For this purpose, there are BTC, ETH AND USDT wallets, “the only way presently to exchange for quick purchase and to avert the inconveniences we have been encountering as banking systems are down”, as the message reports. The problem is that the ONG doesn’t exist, as well as its “media manager”. It’s a scam to collect money and make it disappear, transferring it to other untraceable accounts. Beware of it, if you want to make donations, choose only the official organizations!