Fake invoice DHL decoy for a malware via Guloader. The email gz attachment contains an exe: the loader, which contacts a url and downloads the final payload. This however is unknown

A fake DHL invoice is the lure for a new malware campaign, which passes via Guloader. 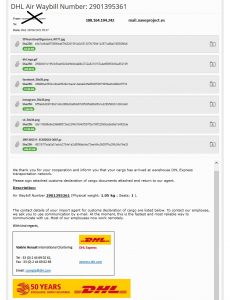 The gz attachment contains an exe file: the loader itself, which contacts another url and downloads the final payload. It is not clear at the moment what it is. Guloader has been used by cybercrime to carry different types of information stealers such as AgentTesla / Origin Logger, FormBook, NanoCore RAT, Netwire RAT, Remcos RAT, Ave Maria / Warzone RAT and Parallax RAT.

Cybercrime, Lazarus spreads Applejeus via fake cryptocurrency apps
Volexity cybersecurity experts: The North Korea’s APT uses a fake trading website, that mimic a legit one, and DLL Side-loading to distribute the malware.
Syria, anomalous pause in Turkish attacks in Kurdistan
The most accredited hypothesis is that it is due to logistical needs (supplying the front line with ammunition). This suggests that Ankara lacks advanced Combat Service Support.
Cybercrime, fake Docusign email spreads a new global phishing campaign
It asks to open a link to revise an agreement. It lands to a website that simulates the victim’s organization homepage, in which the user has only to digit the password.
Search
Newsletter