AveMaria hides herself in an email from a Dubai company. The email lzh attachment, also arrived in Italy, hides an executable: the malware itself

AveMaria is hiding in a fake email from a Dubai company, which has also arrived in Italy. 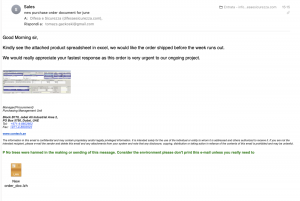 The lzh attachment contains a fake word document, which is actually an executable. This is the malware itself and, if opened, activates the chain of infection. The goal of cybercrime is to steal data from the victim, as AveMaria is a Remote Access Trojan (RAT) with the ability to provide remote access to the desktop, act as a keylogger, increase user privileges, steal passwords and more.

Cybercrime, new Formbook campaign via DHL fake mail
The zip attachment contains an exe file: the malware itself. This, if opened, activates the infection.
Cybercrime, 26 million login credentials are exposed on the cloud
NordLocker cybersecurity experts found a 1.2 TB database of stolen data for sale. Inside there were files, cookies, and credentials. Suspects on Raccoon.
Syria, Russia attacks HTS positions in Idlib with fighters
It’s the response, together with the SAA, to the pro-Turkey group raids against Moscow's allied militias in Maasaran. There is an escalation in the region.
Search
Newsletter