New “Your website, db and email has been hacked” phishing scam. Threat actors blackmail owners asking $2,500 in Bitcoin to not damage the websites reputation and sell data leaked. Anything has been compromised, just email spoofing exploiting

“Your website, databases and email has been hacked”: this is the subject of the last email phishing campaign, aimed to extort money from victims. 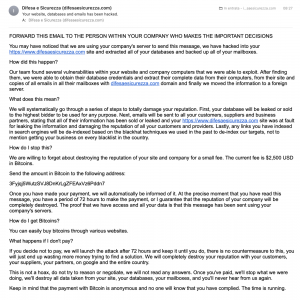 The scammers ask $2,500 in Bitcoins from a spoofed address linked to thew user to not publish all the data they claimed have been extracted from a hacked website. Otherwise, they will damage the victim’s reputation and sell the data leaked to the highest bidder. Finally, to substantiate the blackmail, they provide general information on how they compromised the site exploiting some “vulnerabilities”. Everything if false. It’s a scam. No one hacked the site and stole the data it contained. The email is just a trick to try to extort money from users by exploiting spoofing. Don’t fall into the trap!

Cyber Warfare, XakNet offensive against the energy sector in Ukraine
Pro-Russian hackers close to the GRU attack institutions, carriers and suppliers with DDoS. The operation is complementary to the Moscow military one: the objectives are shared.
Cybercrime, Sharkbot is disguised in Android file managers apps
The apps work as a dropper for the malware and they are downloaded mostly from UK and Italy. The trojan attempts to steal online bank credentials.
Cybercrime, AgentTesla now passes by banks in Turkey
The email attachment “12790429914_20221122_05373027_HesapOzeti.7z” contains an exe file: the malware. Stolen data is exfiltrated via SMTP.
Search
Newsletter