New AsyncRat campaign takes advantage of a fake invoice from a real company in India. The compressed attachment contains an exe file which, if opened, triggers the infection of the malware

AsyncRat is targeting users in several countries with a malspam campaign linked to fake invoices from a real company in India. The compressed attachment contains an exe file, which, if opened, activates the malware infection chain. AsyncRAT is a Remote Access Tool (RAT), designed to remotely monitor and control other computers via a secure encrypted connection. It is an open source remote administration tool, however, often used by cybercrime as it has various features such as keylogger, remote desktop control, others that can cause damage to the victim’s computer.

The fake email with the malicious attachment 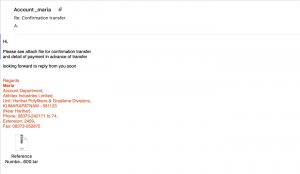 Defense and Security goes on vacation
The publications are suspended, except for particular events, from 1 to 21 August. In the meantime, we are preparing some news for the second half of the year.
Cybercrime, CosmicStrand now hides in modified UEFI
Kaspersky cybersecurity experts: The malware, a rootkit, downloads a malicious program at operating system startup, which performs the tasks set by the attackers.
Ukraine, Anonymous prepares to reveal Russia’s interests in Europe
Project by squad303, which created 1920.in web page, through which 110 million messages were sent to the Russians to bypass Moscow's propaganda and censorship.
Search
Newsletter